Originally published on Marketwatch.com on March 26, 2018 By Jacob Passy 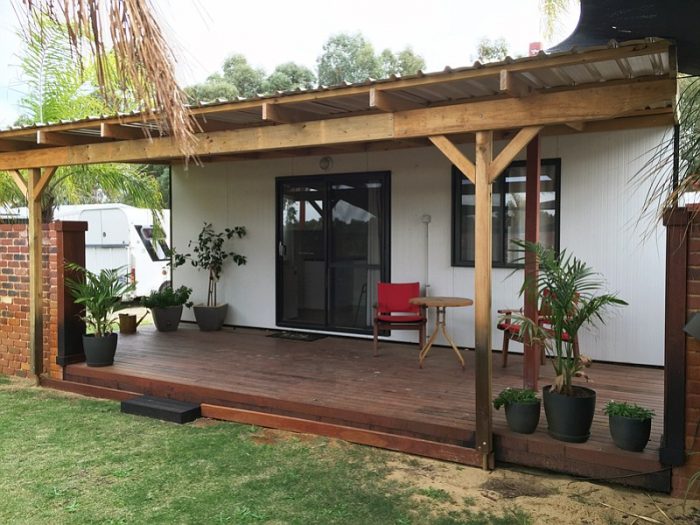 In-law suites, granny flats, accessory dwelling units — whatever you call them, developers and housing economists say these units could be a cure to the inventory shortage in real-estate markets nationwide. That is, if homeowners actually show interest.

Accessory dwelling units are secondary units built on or into single-family homes. Most often they are completely separate, cottage-like structures, though in other cases, they are spaces that were converted from garages or basements to serve as an individual living quarter. In recent years, advocates have pushed city and state governments to loosen zoning laws so that more of these units can be built.

Don’t miss: Get ready for most competitive spring home buying season since the Great Recession

And those laws appear to be having a significant effect. In California, three new zoning laws took effect in 2017 that allowed for expanded development of granny flats. As a result, California experienced the largest uptick in the number of building permits granted for these units of any state, with a 63% increase, real-estate data firm Attom Data Solutions reported, using data from real-estate data provider BuildFax.

Some cities particularly benefited: Santa Barbara, for instance, saw 314% more permits issued for accessory dwelling units, or ADUs for short. Hawaii saw the next largest increase of any state at 31%, followed by Tennessee (25%) and Washington (22%). California also had the largest number of total permits issued in 2017 for in-law apartments, with 4,352, more than twice as many as Oregon, the state with next-most. 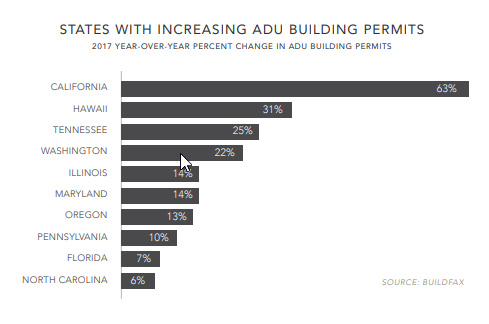 For years now, advocates have called for loosening of zoning laws nationwide to allow more homeowners and investors to build these secondary units into or alongside existing single-family properties. The argument generally goes that granny flats — while not necessarily a complete cure for the inventory woes plaguing housing markets — will expand the options for those seeking housing, particularly renters.

That in turn will relieve inventory issues that are driving up housing costs. “At a time when many housing markets are experiencing severe supply constraints and housing affordability is under stress nationwide, accessory dwelling unit legalization represents a low-profile free-market solution that requires little from government actors beyond getting out of the way,” Jonathan Coppage, a visiting senior fellow at conservative think tank R Street Institute, wrote in a March 2017 report.

Plus, homeowners and investors can reap the rewards of these units, in terms of income from short- and long-term rentals. Plus, homeowners can use the spaces flexibly — they can easily be converted into office or storage space if that’s needed.

While more homeowners do seem to be exploring opportunities in granny flats, a building boom hasn’t quite yet started for a number of reasons. For starters, many areas of the country still have zoning restrictions in place against these units or don’t have a streamlined process to get a building permit.

Moreover, homeowners don’t appear to have the biggest appetite for building these units. They cost tens of thousands of dollars to build, and financing can be difficult to obtain. Renting them out on Airbnb has also proved to be costly in terms of taxes, deterring some who were considering these units for short-term rentals.

Other concerns included congestion, dealing with tenants if the place is rented out, and limited parking space. And one investor told Attom Data Solutions that properties with in-law suites were becoming more difficult to sell.

Still, even if these units don’t become commonplace, the push for looser zoning laws could have its own reward. Current restrictions are making it difficult to create denser housing in places like Seattle that are sorely in need of additional inventory to meet excessive demand.

Indeed, Seattle had a higher share of single-family homes among its total residential properties (68%) than the national total (55%), according to Attom Data Solutions. That’s also true of other in-demand cities such as San Francisco (67%) and Los Angeles (63%) that could also benefit from these policy changes.
More from MarketWatch

This city saw the biggest home-price growth in 2017 — and, no, it’s not on the West Coast
Good news: Eye-popping apartment rents have barely budged in recent months
Buying a home this spring? Brace yourself for some tough decisions