Originally Published on Buzzfeed.com on January 13, 2018 By Charlie Warzel 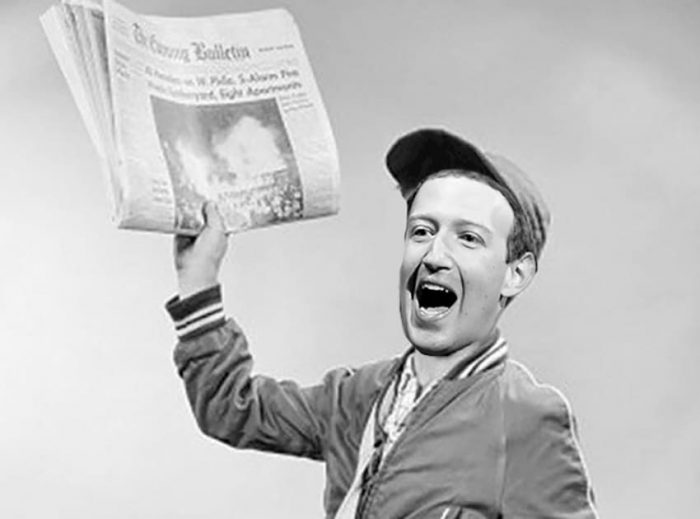 The world’s largest social network wants to go back to an idealized safe space, free of hyperpartisan pages, misinformation, and fake news. Can it?

When news broke on Thursday evening of Facebook’s dramatic overhaul of its News Feed, the worlds of media and publishing erupted. But inside Facebook, the reaction was markedly different — indifference. “No one cares about feed changes,” a current Facebook employee told BuzzFeed News.

Though the changes have trimmed $25 billion from FB’s market cap and have likely given publishers night sweat–inducing anxiety, they don’t appear to be generating much discussion within Facebook’s rank and file. As of late Thursday evening, it hadn’t even really registered on the company’s internal Q&A board, which was preoccupied with other things, like questions hoping for a Facebook foray into cryptocurrency, and queries about exit interviews and AI chatbots.

But for most everyone else using the world’s largest social network to draw attention to their content, the change is potentially seismic. While Facebook is notorious for its endless piddling product tweaks, this one seems a substantive shift in strategic vision. It’s an unprecedented acknowledgment that Facebook’s core feature — News Feed — has not worked out at all the way it was intended. It was abused by peddlers of misinformation. It was used by foreign governments to attempt to interfere in elections. It made people feel bad.

In many ways, Facebook’s planned changes to News Feed are a retreat from the online public square the company helped create. They’re a tacit admission that the company’s great news experiment — which made it one of the most successful publishers in the world — failed. And now Facebook wants to go back to an idealized safe space, free of hyperpartisan pages, misinformation, and fake news. But when you’re home to nearly 2 billion humans, no change is ever simple; Facebook moved fast, broke things, and changed the way that the world produces, consumes, and shares information. And changing course more than a decade into one of the most disruptive social experiments ever might prove more than just a little difficult.

Facebook has framed the upcoming changes to its News Feed as ones that will make the platform a better, safer place where users can “build relationships” instead of whiling away hours consuming “passive” content. It’s not about time spent, CEO Mark Zuckerberg told the New York Times, but “that time spent on Facebook is time well spent.” For Zuckerberg well spent means not just more rewarding interactions with friends and family, but less misinformation and fake news — and presumably less congressional scrutiny as well. For a company that’s always prioritized engagement and attention above all else (Zuckerberg told the New York Times Thursday that the change could “cost the company in the short term”), the selfless frame — we are willing to sacrifice attention for the good of our users — feels like a departure. And it’s one that some former senior employees aren’t exactly buying.

“They’re getting way too much credit for being altruistic here,” a former senior Facebook employee told BuzzFeed News. “This strikes me less as focused on fake news as much as a last-gasp effort to get people to view Facebook as place to share intimate updates with friends and family.”

For the last five years, according to multiple sources, Facebook has lost “friend and family sharing” to other social platforms including Snapchat, Instagram, iMessage, and others. “Time spent in Facebook has been declining for the past couple years for the first time ever,” the former senior employee said. “Facebook has research showing that if the percentage of friend/family content gets too low then people don’t find Facebook valuable anymore.” It’s worth noting that this former employee is dubious of Facebook’s spin. “I don’t think it will work,” the former senior employee said. “And I think it’s a ‘kill two birds with one stone’ attempt, in that they get good press for trying to address sensationalist news.”

Some outside observers agree. “I think it makes sense to understand this more as ‘we need more things for people to engage with’ than ‘we’re trying to make the world a better place,'” former White House chief digital officer and Silicon Valley veteran Jason Goldman told BuzzFeed News.

For publishers, the change is a reckoning of sorts — a potentially massive shift in the way that media and news organizations have been building or courting audience, and, in many cases, the way they create and present their content. And it’s been broadly met with everything from grave concern and outrage to reluctant optimism.

That the shift will cause upheaval for publishers is a given, but there’s no guarantee that Facebook’s goal to increase meaningful interactions with people you know will solve the company’s fake news problem. While it may cut down incidental exposure to misinformation, the changes could, in some cases, only harden filter bubbles with a steady stream of content from people with similar ideologies. Meanwhile, a retrenchment from News Feed into more walled-off Groups and communities could exacerbate exposure to misinformation. As one platform executive told BuzzFeed News, “the people who end up being chemtrailers or anti-vaxxers do so because of friend and community groups.”

Given that research suggests 45% of all American adults say they get at least some news from Facebook, the shift is a potentially risky change of course that’s likely to have unintended consequences for news consumers. As the fallout from its election interference crisis demonstrated late last year, Facebook hasn’t just reshaped the media, but rewired our lives in unknowable ways. It’s altered our political landscape with its ability to influence voters and upend traditional advertising, and — in the case of Donald Trump — even decreased a candidate’s need to rely on major political parties.

“It is concerning, though, that at a time of immense turbulence in the world, content from media organizations is being deprioritized,” another former senior employee told BuzzFeed News. “Facebook has become an essential piece of infrastructure for public content, and we should be wary of anything that undermines the platform’s utility here. The media is on the frontlines of helping our society navigate the present challenges, and Facebook has an obligation to help its community connect with information as readily as with friends.”

And so, with Facebook’s centrality in our lives and the greater culture, the company’s retreat feels less like a selfless act than an abdication of a civic responsibility that Facebook perhaps never truly wanted.

Facebook’s relationship to news has always been rocky. The company tried for years to make it work for the platform. It hired trending news curators. It worked with publishers, paying them to create live content (BuzzFeed is a partner) and it hosted their articles. But Facebook’s commitment to news has always been hampered by an algorithmic approach that prioritizes likes and engagement. In this sense, news, which can be unpleasant and upsetting and controversial, has always been at odds with Facebook’s goal. People don’t “like” bad news and sharing controversial opinions can result in negative user experiences or, worse, unfriending: the ultimate negative outcome in Facebook’s eyes. In many ways, the changes Facebook announced yesterday are the logical conclusion to an increasingly anxious — and ultimately doomed — years-long courtship with news. “News on Facebook has actually hurt, not helped, them,” another former senior Facebook employee told BuzzFeed.

News, which can be unpleasant and upsetting and controversial, has always been at odds with Facebook’s goal.

To hear Facebook insiders tell it, it’s unclear how much the company truly wanted to be in the media game. “Public content was all about defeating Twitter originally,” said one. Facebook referral data bears this out. In late 2013 — starting just weeks before Twitter’s IPO — BuzzFeed News reported that traffic from Facebook referrals to more than 200 publisher sites went up 69% from August to October 2013. As the former employee explained, this show of strength ultimately didn’t do much to kill Twitter, and perhaps drew Facebook’s attention away from its original mission.

It’s hardly surprising, then, that the Great News Feed Shift of 2018 has made fewer waves inside Facebook HQ. Multiple former employees told BuzzFeed News they believe the move will be popular among Facebook employees. “Jamming more news and celebrity content in everywhere was always seen as being at the expense of Facebook’s main focus on connecting people,” a former senior employee told BuzzFeed News. “There were a million other things to do, like improving performance, fixing the broken desktop site, or trying to improve mediocre core features.”

A current employee echoed that sentiment, noting that inside the company the changes are being viewed as a positive step.“Facebook will become more local,” they told BuzzFeed News. “I think it’s good for humanity, overall.”

Still, after years of grand claims from Facebook and its top executives, it’s hard not to view the changes the company is making to its News Feed as an admission that the company overreached and ultimately failed to deliver a new way forward for news. More than that, it feels like a scaling back of Zuckerberg and Facebook’s ambition as a whole. The news game has been responsible for many of Facebook’s crises and a good deal of its bad press, but it’s also played a fundamental role in making the platform central to the lives of hundreds of millions. Even with news deprioritized, Facebook is still among the best ad tech companies on the planet and home to many vibrant online forums. The question is, for the company that wants to fundamentally reshape the world, is that enough?

Charlie Warzel is a senior writer for BuzzFeed News and is based in New York. Warzel reports on and writes about the intersection of tech and culture.