Originally Published on MarthaStewart.com on February 28, 2018 By Balley Basham 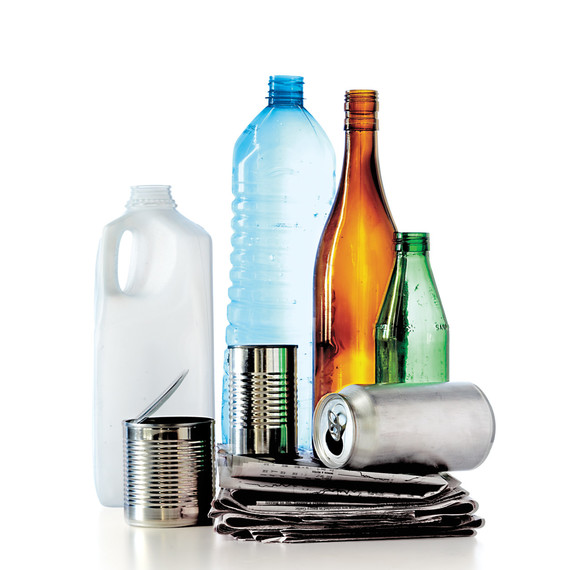 Everything you need to know about what, where, and how to recycle in every state — plus where to call if you still have questions.

We’ll offer simple ways you can have a positive impact on your health, your home, and even the world. Get inspired by our Change Makers and the companies that are making a difference in the way we live. Join us!

The average recycling rate for the nation has hovered at roughly 34 percent for the last five years. According to the National Resources Defense Council, this is one of the lowest rates of any developed nation. And though our numbers are up significantly from 40 years ago—merely 6 percent in 1960 — Americans are still sending more than half their trash to landfills and incinerators.

“There are a number of reasons why we have plateaued at this recycling rate,” says Darby Hoover, a senior resource specialist at the NRDC. One of the reasons is that guidelines for what can and cannot be recycled vary from state to state, even between cities, Hoover explains. “But you can help reduce waste by learning your community’s recycling rules.” Here’s everything you need to know:
Alabama

Did you know…? Since 2007, local organizations have helped conserve over 18,000 gallons of gas thanks to the Don’t Be Fuelish campaign designed to encourage Alaskans to conserve fuel.

Did you know… ? Residents can take part in a 6-week challenge with the Department of Environmental Quality to learn about minimizing the amount of local household food waste.

Did you know… ? Arkansans have access to their very own recycling and reuse specialist who can help answer any questions about local recycling and waste reduction efforts!

Did you know… ? In 2014, California became the first state to move forward with legislation outlawing the single-use plastic grocery bag statewide.

Did you know… ? The University of Colorado Boulder hosts zero waste school football and basketball games.

Did you know… ? On the Reuse Marketplace website local Connecticut businesses and organizations can share and swap surplus materials, from office cubicles and chairs to classroom blackboards.

Did you know… ? In 2009, the Diamond State passed legislation requiring all retail stores to offer a plastic bag return option for shoppers.

Did you know… ? Florida’s compost and mulching facilities help to repurpose more than 1.3 million tons of organic plant waste each year — a plus for the state’s year-round growing needs!

Did you know… ? Georgia’s Environmental Protection Division requires all local self-serve and conveyor car washes to abide by a water conservation rule and be inspected annually to ensure compliance.

Did you know… ? In addition to non-biodegradable plastic bags, paper bags containing less than 40 percent recycled material are outlawed in Hawaii’s most heavily-populated counties.

Did you know… ? Cities in southwest Idaho kicked off 2018 with a recycling ban that no longer allowed residents to recycle plastics numbered 3-7 (think berry containers and meat trays) or any kind of bottle cap. Instead, households will be given special bags for collecting these kinds of plastics which will then be processed into a synthetic fuel.

Did you know… ? In 2016, Illinois launched Recycle Thin Film Fridays as an initiative to relcaim thin-film plastic bags and encourage residents to use reusable alternatives when possible.

Did you know… ? Since 2001, the Indiana Recycling Coalition has hosted the Recyclemania Tournament — a nationwide competition encouraging college students to take part in various waste-reduction initiatives. Participants have helped recycle and compost 80.1 million pounds of recylabels and organic materials!

Did you know… ? The Hawkeye state generates more than 3 million waste tires every year. Since waste tires are banned from landfills, and it is prohibited to burn them, residents can bring these tires back to their dealer to be recycled properly.

Did you know… ? In 2018, Kansas State University’s recycling center worked with campus housing services to recycle over 130 mattresses. The mattresses were collected, cleaned, and redistributed to communities in need.

Did you know… ? With statewide initiative Thinking Outside of the Box, Kentucky residents are encouraged to reduce waste and recyclable consumption by choosing products with minimal packaging, buying in bulk when possible, and “shopping the shelves” in their homes first.

Did you know… ? Louisiana offers some of the highest tax credits in the country for solar and wind energy systems providing a 50 percent credit up to $12,500 for energy systems installed on residential properties.

Did you know… ? To help prevent mercury pollution, Maine residents are encouraged to bring their old mercury thermostats to local participating hardware stores and drop-off sites in exchnge for a store discount.

Did you know… ? In some parts of Maryland, residents don’t even need a city-issued recycling bin to recycle — materials can go into any container as long as it is marked “Recycle” and is not a plastic bag.

Did you know… ? In 2014, the state’s Department of Environmental Protection banned the disposal of commercial food and organic wastes by any business or institution that already discarded more than one ton of organic waste per week.

Did you know… ? In the Great Lakes State, there is a 90% return rate for refundable bottles and cans!

Did you know… ? In 2016, the state’s Capitol building moved closer to becoming a zero-waste workplace with programs like organics recycling and the phasing out of desk-side trash collection.

Did you know… ? In the Magnolia State, the recycyling indistury alone helps support 5,000 jobs.

Did you know… ? Since 2014, the Missouri State Recycling Program has hosted a statewide Zero Waste Challenge on Earth Day encouraging local school students to pack lunches in reusable containers and opt for easily recyclable plastics when needed.

Did you know… ? With over 100 recycling centers around the state, collecting 15 different materials from old batteries to cooking oil, 90 percent of all Montana residents live within range of a drop-off site.

Did you know… ? In 2018, Lincoln will become the first Nebraska city to implement a ban on sending corrugated cardboard to landfills joining cities in six other states.

Did you know… ? Since 2014, the Silver State has hosted a recycled art contest, encouraging residents of all ages statewide to get creative with their recyclables (and win a cash prize!).

Did you know… ? Under state law — New Hampshire joins nine other states as a member of the Toxics in Packaging Clearinghouse — the sale of any packaging with intentional use of lead, mercury, or other harmful chemicals is prohibited.

Did you know… ? In 1980, Woodbury, New Jersey was one of the country’s first cities to adopt a recycling program.

Did you know… ? The southwestern state offers its local communities the option of implementing Pay-As-You-Throw collections where residential households only pay per unit of trash discarded rather than a standard fixed fee.

Did you know… ? Thanks to the Big Apple’s refashionNYC textile collection program, 12.3 million pounds of discarded clothing, linens, and other household textiles have been saved from landfills to date. Instead, these items are sorted and donated to non-profits or turned into new material like carpet padding.

Did you know… ? To date, the Environmental Stewardship Initiative – a free and voluntary program open to organizations and facilities statewide – has helped conserver 86 billion gallons of water and over 42,000 tons of landfill waste.

Did you know… ? For residents of the state’s capital, Bismarck, recycling is a single-stream process meaning all recyclable items can go into the same bin.

Did you know… ? On average, more than 11 thousand tons of litter accumulates on the state’s roadways every year costing $4.5 million dollars in clean-up costs. With Keep Ohio Beautiful’s annual State Road Cleanup, volunteers are helping local taxpayers save over $400, 000!
Oklahoma

Did you know… ? The Oklahoma Department of Environmental Quality’s annual Use Less Stuff campaign is a week-long, statewide initiative (leading up to Earth Day) that encourages residents to consume and dispose of goods more sustainably.

Did you know… ? Oregonians are recycling more than ever before, according to a 2016 report by the Oregon Department of Environmental Quality, with the state hovering at a 46.5 percent recycling rate.

Did you know… ? In 2015, the state recycled over 7.78 million tons of resources saving 10 million tons of carbon emissions from the air — that’s like removing 2 million passenger vehicles off the road for a whole year!

Did you know… ? In 2016, Rhode Island became the first state to adopt standardized Recycle Across Amerca bin labels which help clarify how and what to recycle. These labels, already used by brands like Disney and Whole Foods, have been shown to increase recycling and decrease contamination.

Did you know… ? The Palmetto State is home to a rapidly growing green industry with over 500 recycling companies creating over 21,000 jobs.

Did you know… ? Sioux Falls is one of few cities in the country that accepts loose plastic bags in curbside recycling. However, bags must first be bagged into a single plastic bag and tied shut otherwise they risk jamming recycling sorting equipment.

Did you know… ? Thanks to Tennessee’s Mobile Collection Service program, over 300,000 local families have been able to safely dispose of nearly 20 million pounds of hazardous household trash like wallpaper remover, fertilizers, and pool chemicals.

Did you know…? On takecareoftexas.org, Texans can use the savings calculator to easily find out how much energy, water, and money they can save by making their home more sustainable. Plus, they can pledge to keep the Lone Star State clean and help spread awareness with a Take Care of Texas license plate!

Did you know…? Since 1996, the state’s official Recycling Market Development Zone Program provides various eco-incentives for eligible businesses who recycle, use recycled materials when manufacturing, or compost.

Did you know…? Vermont was recently declared the greenest state in America with some of the lowest total municipal solid waste generated per capita and some of the country’s highest air quality.

Did you know…? In 1989, this southeast state passed legislation establishing a 25% recycling rate target for its communities. As of 2015, Virginia’s recycling rate surpassed the national average at 44%.

Did you know…? After the passing of a 2015 city law, Seattle residents are now prohibited from throwing food waste in the garbage can — if found, their bin risks being tagged red and the residents may face fines.

Did you know…? In 2016, the use of Styrofoam was officially banned in all food-serving businesses and organizations throughout our nation’s capital.

Did you know…? The Charleston Co. School District won an EPA award for being host to one of the state’s first student-driven commercial composting programs. Since 2012, over 2 million pounds of food waste have been diverted from landfills.

Did you know…? A whopping 94% of Wisconsin households recycle and over half are composting their yard waste. These efforts have helped keep nearly 1.7 million tons of trash out of state landfills and incinerators annually.

Did you know…? At the University of Wyoming, students can drop off unwanted Styrofoam peanuts, binders, folders, and select office supplies at recycling stations to be reused.